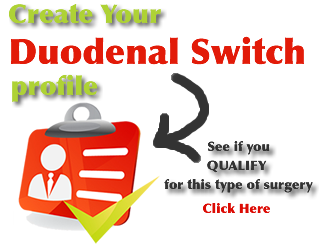 When it comes to fighting obesity with weight loss surgery, the duodenal switch is one of the most effective weapons available. It hits obesity hard, using a combination of two surgical techniques: restrictive and malabsorptive.
The duodenal switch also is regarded as one of the biggest challenges for bariatric surgeons, due to its complexity and amount of time required in the operating room for the procedure.
A restrictive bariatric surgery is one that reduces the size of the stomach. The bariatric surgeon divides the stomach vertically and removes more than 85% of it. The remaining part of the stomach, which is banana-shaped, can only hold about 6 ounces of food or liquid.

The duodenal switch is a variation of another surgical procedure known as the biliopancreatic diversion. The Duodenal Switch doesn’t remove such a large portion of the stomach, and also leaves intact the pyloric valve, which regulates the release of stomach contents into the small intestine.
The Duodenal Switch also retains a small part of the duodenum in the digestive system. After eating, food mixes with stomach acid, then travels down into the duodenum, where it mixes with bile from the gall bladder and digestive juices from the pancreas.
Malabsorptive surgeries are designed to restrict the body’s ability to absorb a high amount of calories and nutrients. The duodenal switch surgery involves rearranging the small intestine to separate the flow of food from the flow of bile and pancreatic juices. The food and digestive juices interact only in the last 18 to 24 inches of the intestine, allowing for malabsorption. About 20,000 duodenal switch procedures are done each year in the U.S.

To be considered a good candidate for the duodenal switch, you must have a body mass index (BMI) of more than 40; some candidates have a lower BMI but have weight-related medical problems that need to be resolved. People with very high BMIs – greater than 55 – may find this type of bariatric surgery most effective.
No matter what type of bariatric surgery you choose, the first step to healthy weight loss is to make a lifelong commitment to losing weight the right way. Drastic weight loss should never be considered lightly, and it isn’t a quick fix.

About The Duodenal Switch

Here are the fundamental facts about duodenal switch surgery:
Since the duodenal switch is such a lengthy operation – sometimes lasting 3-4 hours – some surgeons divide the procedure into two parts. Most patients need 3-4 weeks of recovery time after the surgery.

After the Duodenal Switch Surgery

Getting re-adjusted to eating solid foods is a necessary process for Duodenal Switch patients. Some people who undergo duodenal switch surgery do experience difficulty consuming liquids immediately after surgery because of swelling around the stomach and small bowel. If this happens, the patient may need to be re-admitted to the hospital for 1-2 days to rehydrate.
Following surgery, some patients experience intense pain, which may be alleviated by prescription painkillers.

How Much Weight Can You Lose With Duodenal Switch

Typically, duodenal switch patients lose as much as 70% of their excess weight, over a period of one year to 18 months. Patients will also have to take nutritional supplements, including vitamin A, vitamin D and calcium, daily for the rest of their life.